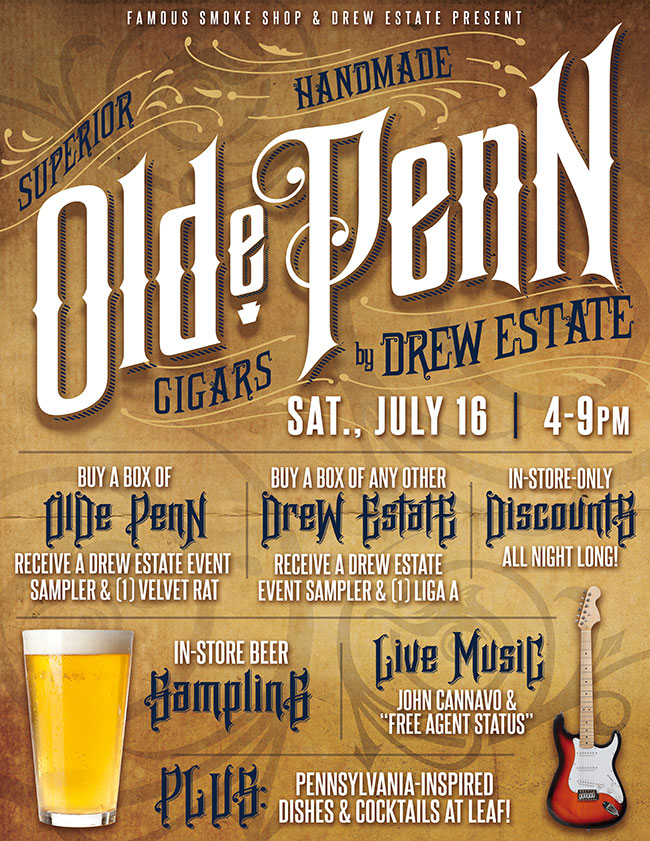 Life in Olde Penn was anything but pedestrian. Its people worked hard, played fair and stood up for what they believed in. When they met adversity face-to-face, they gave it a wry look and spit in its eye. Pennsylvanians business was building America. They followed their fathers into the coal mines, forged America’s railways in their steel mills, tamed the Great Lakes, and 4,600 cigar factories (more than any other state in the Union), plus myriad Keystone State tobacco farms, satisfied the nation’s appetite for a good smoke. Suffice it to say, Pennsylvania’s roots run deep, hold fast, and remain strong. And it’s in this unanimous, spirited and determined tradition that Olde Penn cigars were forged with the same grit and determination that’s been coursing through Pennsylvanians veins since 1682. Olde Penn cigars are handcrafted with choice Nicaraguan longfillers skillfully rolled in a plush Connecticut-seed wrapper grown in Ecuador. The smoke is smooth, creamy, and mild-to-medium in body, while supplying rich layers of earth and spice. The cigars are presented in handsome-looking boxes of 20 cigars in the following five shapes: Olde Penn Small Corona (4½” x 43), Olde Penn Robusto (5″ x 50), Olde Penn Lonsdale (7″ x 46), Olde Penn Toro (6″x 52), Olde Penn Gordito (6″ x 60). We are working on an update so you can log your Olde Penn Smokes! #De4L